The Grind of Gearing Up

With two max level characters now, I'm having a really hard time trying to avoid gearing up both toons at the same time.  The way the endgame system works in SWTOR, it really makes zero sense to work on gearing two different characters at the same time.  Because once you hit max gear level (306) on one toon, all the future gear drops at that level are bound to legacy, which means that everything that drops can be sent to any other max level toons to help them gear up.
All that being said, I'm finding the process to be really slow and painful.  I'm generally just running veteran flashpoints for gear and that seems to work okay.  Sometimes I'll get lucky and get 2-4 upgrades on a flashpoint, but sometimes I'll get nothing at all.  Just RNG.
My Jedi Guardian is sitting around gear level 290, so he's got quite a way to go to that magic 306.
I've also been working on leveling up my crew skills across all of my characters.
The above table is what that looks like at the moment.  I'm probably going to switch one of Ganntt's skills to Diplomacy or Investigation, but I still need to figure out how much either of those may be critical to leveling some of crafting skills.
That's about it for now.
Cheers!
Posted by Joar at 8:46 AM No comments:

I've started Chapter 3 on my 8th class.  My Powertech Bounty Hunter is working his way through Belsavis.  I've enjoyed this class story line so far maybe a little bit more than the Jedi Consular story line, but I still wouldn't put it in my top 3.  But I'm enjoying the class so far.

I've heard some folks complain about the fire discipline of powertech, but I've had no issues with it at all.  I did a decent chunk of heroics with a friend about mid-way through leveling, so I've outleveled most of the zones and have pretty good gear as a result, so that may be a big part of why it's working well for me.

After that, I'm mostly just grinding conquest each week on both my Jedi Guardian and my Smuggler.  I may start working on getting all of my Crew Skills maxed after I'm done with the whole leveling thing as well.

I discovered that leveling crafting Crew Skills is actually pretty easy because you can get there purely by crafting the components.  It takes some time, but as long as you have all the materials, it tends to go pretty quickly.  It's a decent chunk of gold to purchase each of the Onslaught level crew skills, but I'm thinking it's probably pretty quickly worth it in terms of GTN sales.

Hoping to finish the Legendary achievement by the end of this week though, so watch this space!

I managed to hit level 75 on my Jedi Guardian yesterday while working through the Iokath story line.  Yes.  That's right.  I haven't even started on the actual Onslaught content yet.  Frankly, I'm not a big fan of the Iokath stuff either, but I just felt like I should at least start through it.

One overarching piece of feedback for the SWTOR team after working through KOTET and the first part of Iokath is please, no walker quests.  Ever again.  Unless you're willing to fix the mechanics in them, they are terrible, and please stop.

I'm debating respecc'ing the Jedi to a tank spec now, but haven't fully decided yet.  I also started working my smuggler through the Hutt Cartel story line just to keep earning conquest points and gearing up.  My plan is to do that and Revan and then skip straight to the Onslaught stuff if I'm in the right spot level-wise.

On my Sith Marauder, I've now finished chapter 2 and am definitely enjoying the class a lot more.  I'm a huge fan of Jaesa as a companion, so we're just rolling through everything now.  I'm also starting to unlock all the strongholds for the huge conquest bonus, so that's helping as well.

I haven't spent much time on the Jedi Shadow or the bounty hunter, but that will definitely change once I get the Sith Warrior done, which could happen fairly quickly now.

One other thing that I've discovered on the professions is that you can absolutely level the crafting crew skills strictly by leveling the various components used to craft gear and not by crafting any actual gear.  Going to try that with the various ones that I've been working on.  The big crafting project is likely going to require moving everyone's materials inventory into Legacy Cargo and then crafting away.

Close to Finished with KOTET

I just finished the palace puzzle portion of Chapter VI of KOTET, and I am definitely ready to be finished with this particular stream of content.  I'm remembering that this is a large part of the reason that I stopped playing SWTOR the last time.  Advancing through this content just feels like small amounts of fighting in between long movie clips.

The dialogue and choices make for some fun, but I'm not sure they make a huge difference anyway.

I'm much more curious to see what the actual Onslaught content looks like once I get there, and then see how challenging it is to gear up.

I'll also be pushing my Smuggler to 75 after I finish with the Jedi Guardian.

Beyond that, I've been working a bit on the last 3 characters that haven't finished their class story line.  The Marauder has made the most progress so far and should be finishing Chapter 1 shortly.  As I've unlocked more abilities and figured out a better rotation, that class is definitely working better for me now.  I've also been working a little bit on the Bounty Hunter and on the Jedi Shadow while I let rested xp accumulate on the Marauder, so they've made some progress as well.

I'm still debating on crew skills.  I've set it up so that I have at least one of each crafting skill, but I'm debating whether it is really worthwhile to work on leveling all of those up.  The upside is that with my legacy storage, I can very easily using mats I've gathered across all my toons to level these crafting professions.  It'll just take some time to set up.  It would be nice to be in a position to outfit all my alts in decent gear once they hit max level.

There is, of course, a spreadsheet that has been established to help track this.

That's it for this week!

Snuck in the Smuggler Before the XP Boost Ended

I managed to finish up the class story line on the smuggler before the experience boost ended.  Being part of a guild with a fully upgraded flagship is a huge bonus as well, so I managed to finish the class story line at level 60.  I'm not even sure where to go from there, because I'm pretty sure that's the level to start KOTFE, just skipping Ilum, Hutt Cartel and Shadows of Revan all together.

I've now started on the Sith Marauder.  I'm still not a big fan.  I might try changing up his discipline to something else and seeing if that helps.

On my original main, Fiordin, I finished the KOTFE story line and have now started the first chapter or two of KOTET.  So far it seems like more of the same.  I'm anxious to get through the pieces that feel like you're just watching a movie, and hopefully the Onslaught stuff is back to more normal questing and progression.  I'm guessing I'll be level 75 before even finishing KOTET (since I'm 70 now), but I guess we'll see.

I finished up the story line for the Sith Inquisitor.  Chapter 3 seemed to grind on for a while, but the finish was very satisfying.  Definitely one of my favorites so far.  For my next characters, I'm going to work on a Smuggler Scoundrel.  I'm trying to alternate between Republic and Empire, but the next Republic Character was my Jedi Sage, which seems awfully close to the Sith that I just finished, so Smuggler will be up next.

I'm also going to work on getting my "main" current on the various chapters and xpacs.  He's currently working his way through Chapter 12 of KOTFE, so we'll see how that all goes.  At least at the moment, if I run an Empire side character through the various xpacs as well, it will likely be the Sith Inquisitor who I enjoyed quite a bit more than the Imperial Agent.  We'll see though.

For the various characters, here is where we currently stand:

Yet again, a content drought in World of Warcraft has driven me back to playing SWTOR.  As an additional draw this time, both of my younger children have also started playing SWTOR now (they've been binge watching Clone Wars and Rebels during the current lock-down).

Before I had left off the last time, I'd gotten two characters completely through their storylines - my Jedi Guardian and a Trooper Commando, and had also gotten the Guardian to the max level at the time and relatively current on the content.

Coming back now, I managed to pretty quickly finish the story line on my Imperial Agent, who was already at the beginning of Chapter 3, and I've now also started on my Sith Inquisitor, who looks like an evil gray tennis ball in his new helmet. 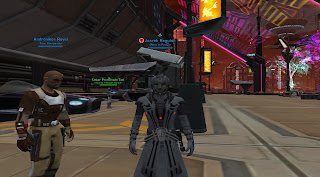 Here is where we currently stand:

The class story lines are going really fast with the current double xp bonus and are essentially all you have to do in order to advance and be comfortably past level 50 by the time you finish the third chapter.